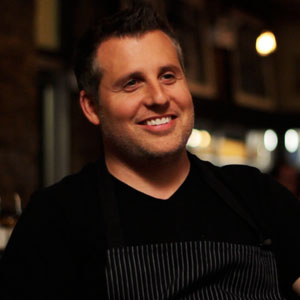 Chef Charlie McKenna has become the ambassador for down-home Southern food in Chicago. His three restaurants, all named after his grandmother Lillie, have featured signature dishes and sauces that have won him national prestige including Winner of the Memphis-in-May World Championship Barbecue Cooking Contest in 2007.

McKenna grew up in South Carolina where barbecue is a way of life. His father opened the original Lillie’s Q in Destin, Florida which Charlie expanded to Chicago. Classically trained at the Culinary Institute of America and having worked under legendary chef Norman Van Aken, McKenna has lent his skills to critically acclaimed restaurants in New York and Chicago.

How to Make a Western Carolina BBQ Sauce

How to Make a Western Carolina BBQ Sauce

How to Prepare Baby Back Ribs

Learn to prepare a classic American favorite with a wonderful smoky flavor.

How to Prepare Baby Back Ribs

How to Trim and Season a Pork Butt

"Today we're gonna show you how to clean a pork butt, and a pork butt is basically the shoulder of the pig."

How to Trim and Season a Pork Butt

How to Make a Basic BBQ Rub

"This is a rub that you can use on all your smoked products, smoked meats, pulled pork, ribs, or chicken."

How to Make a Basic BBQ Rub