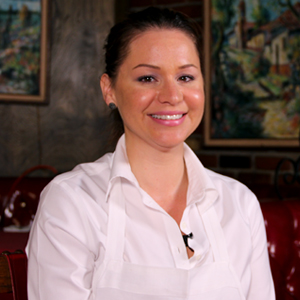 Christy Vega was born to a long line of restaurateurs. Her grandparents, who immigrated to Southern California from Tijuana in the 1930’s, were the proprietors of Cafe Caliente, a famous restaurant and nightclub on Olvera street in Los Angeles. Inspired by the success of his parents, Christy’s father, Ray Vega, opened Casa Vega in 1956 intent on serving traditional Mexican cuisine. The restaurant has been a Los Angeles staple ever since. Having grown up working every position at Casa Vega, Christy is now in charge. Committed both to preserving the family tradition and to modernization and sustainability, Christy is constantly evolving recipes to include healthy options, as well as cage-free, all-natural, and wild proteins.

In 2010, San Fernando’s Business Journal named Christy one of the ‘Top 40 under 40’ business professionals. She has appeared in segments on the Rachael Ray Show, NBC’s Today Show, CBS’s This Morning and on Bravo’s Flipping Out.

These tortillas are easy to make and are sure to impress.

A flavorful and vegan alternative to Mexican red sauce.

These crispy shells are equally delicious and functional, serving as the perfect vessel for your favorite Mexican flavors.

Vegan enchiladas are a delicious Mexican staple made without the addition of meat or dairy.

Peppers can be stuffed or used to add flavor, depth, and heat to a wide variety of recipes.

Refried beans can be enjoyed alone, or used in tacos, burritos, and enchiladas.