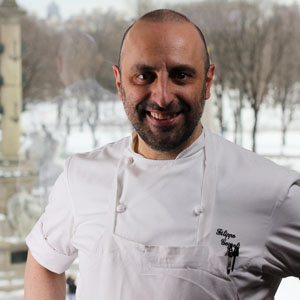 Filippo Gozzoli has demonstrated his expertise in sophisticated, seasonal Italian cuisine all around the world. He most recently dazzled diners at the Michelin-starred Italian destination A Voce Columbus which New York Magazine lauded for “[taking] simple Italian basics and elevating them to a different plane.”

Gozzoli gained recognition in New York when he was named Executive Chef of Sirio Ristorante by legendary restaurateurs, the Maccioni brothers. Before this, he had held several high-profile positions in London, Los Angeles, and various cities in Italy, including six years as Executive Chef at the Park Hyatt Hotel in Milan.

Gozzoli’s career began at the age of 14 when he worked at Ceresole, a Michelin-starred restaurant in Cremona, Italy.

"This frittata is a traditional dish from Italy with a modern touch."

A new technique for creating the perfect, fluffy pancake.