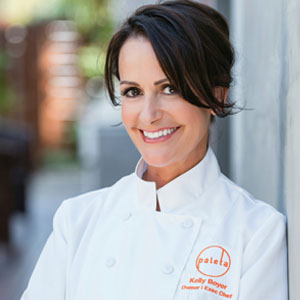 Chef Kelly Boyer is the epitome of a woman who came, saw, and conquered every challenge she has encountered.  She is currently Founder and Executive Chef of Paleta, the wildly popular farm-to-table meal delivery service that is committed to locally sourced and humanely raised ingredients. Paleta began in 2005, and it has been thriving ever since, expanding to include cold-pressed juices, cleanses, and snacks.  Numerous celebrities have expressed their fandom, including Jessica Biel, Jaime King, Scott Wolf, and Wayne Brady.

Though Chef Kelly graduated with the highest academic honors from Le Cordon Bleu, her primary driver in creating nourishing, conscientious food has been her continued success beating a rare, advanced-stage cancer from childhood. She believes that her toxic-food free diet has been the key to her good health. As further evidence of her eco-friendly approach, she even invested time and money into creating southern California’s first certified green kitchen.

Before attending culinary school, she earned a Master’s degree from the Kellogg School of Management at Northwestern University and was a successful executive in the corporate world.

This Greek chickpea and quinoa salad is healthy and light, yet satisfying enough as a stand alone meal.

Frying gives herbs a deeper, smoker flavor and a crisp, crunchy texture, elevating garnishes to the next level.

Gain a fundamental understanding of this popular eating lifestyle.

Couscous, both a grain and a pasta, is a versatile ingredient high in vitamins and minerals.

Understanding this versatile seed will open the door to a plethora of delicious and healthy recipes.

Choosing the perfect produce isn't daunting or difficult when you know what to look for.

This technique allows you to create a healthy, carb-free alternative to traditional pasta.

This cauliflower rice is light and delicious, gluten-free, dairy-free, and Paleo-friendly.

These concepts drive healthy eating, and will help you select the most flavorful, nutrient-rich products available.