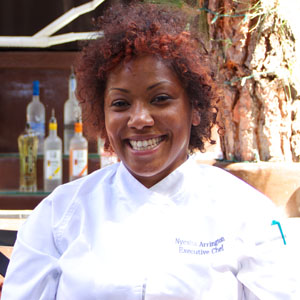 Chef Nyesha Arrington is a young, classically trained chef whose accomplishments have already vaulted her into star status. She was most recently Executive Chef at Santa Monica’s fine-dining restaurant Wilshire, a position she won on the Food Network competition show “Chef Hunter.” She continued her run on television as a competitor on season nine of Bravo’s hit reality show “Top Chef” and on the Esquire Network’s chef competition show “Knife Fight.” She was twice named to Zagat’s “30 Under 30” list of rising chefs.

Arrington has trained under award-winning chef Josiah Citrin at his two Michelin-starred restaurant Mélisse in Santa Monica and under French culinary legend Joël Robuchon at his award-winning Las Vegas restaurants, L’Atelier and The Mansion.