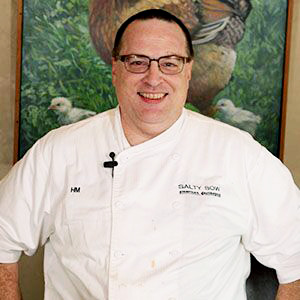 Harold Marmulstein is the executive chef and partner at American gastropub, Salty Sow. At Salty Sow, Chef Harold serves up southern-inspired cuisine at the restaurant's Austin, Phoenix, and Scottsdale locations. Chef Harold has worked as an executive chef for 30 years. He has been awarded "Who's Who of Chefs in America" by the James Beard Foundation and his work has been lauded by Zagat, Conde Nast, and Gourmet magazines.

Chef Harold grew up in Upstate New York and began his culinary journey working at his family's luncheonette. He attended The Culinary Institute of America in Hyde Park and spent several years running restaurants in Baltimore and Atlanta including Dick and Harry's Restaurant, which he ran with his brother for 10 years. He was executive chef at Scottsdale's Roaring Fork from 2008-2010 before heading to Austin to open Salty Sow.

This easy technique uses a spicy and flavorful seasoning mix to create a light crust with bold flavor.

Sweet roasted beets are paired with tangy goat cheese to make a salad that is light, fresh, and colorful.

Duck fat has a high smoke point, is low in saturated fat, and can impart rich flavor to your favorite dishes.

Learn how to break down a whole beef shoulder and remove a flat iron, the most tender and flavorful shoulder muscle.

“Today, we’re going to learn about beets. Everything you wanted to know about beets but were afraid to ask.”

Learn how to build a slow cooker that makes for healthy and low-maintenence cooking.