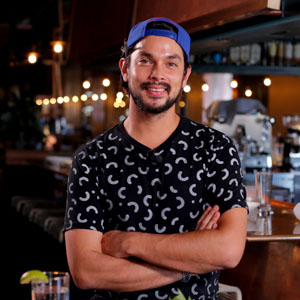 Louis Tikaram is the executive chef of EP & LP in Los Angeles by way of Sydney, Australia, where he was the executive chef at a restaurant specializing in Southeast Asian cuisine. At EP & LP, Louis showcases California produce with Vietnamese, Fijian, and South East Asian flavors, and practiced technique to bring something unique to Los Angeles.

Louis grew up on his family’s 110-acre farm in New South Wales. He raised cattle, grew tropical fruit, and gained an appreciation for sustainability and seasonality. He also spent a portion of his childhood in Fiji, an influence which carries through to many of his dishes. He won Australian Young Chef of the Year 2014 before being brought over to America to lead the EP & LP kitchen.

This traditional Fijian seaweed dish is the one Chef Louis made with his grandmother that inspired him to become a chef.

This hearty vegetable is prepared simply and healthfully to make a quick and nutritious side dish.

Green papaya, the savory sister of ripe yellow papaya, is a common ingredient in dishes from Southeast Asia, Mexico, and other warm-weather countries.

Bold Asian flavors are balanced to perfection in this bright, texturally diverse salad.

This bright, spicy salad, found in food stalls throughout Thailand, features green papaya and a plethora of traditional Thai ingredients.

Learn the simple method for opening both mature and young coconuts.

Learn the simple techniques for cleaning and prepping this prized seafood.

This light aromatic coconut-based curry from Thailand is a great way to showcase beautiful fresh seafood.