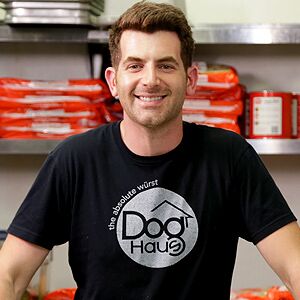 Chef Adam Gertler is a cook, an entertainer, and Würstmacher (sausage-maker) at Dog Haus, the critically-acclaimed gourmet hot dog, sausage and burger concept. At Dog Haus, Gertler oversees production and creation of Dog Haus' proprietary sausages, which include everything from a Spicy Thai Red Currywurst to a Chicken Fontina Sausage to Dog Haus' signature Pastrami Dog.

Chef Adam has also appeared on various Food Network shows. As the charismatic star of Food Network’s "Kid in a Candy Store" and "Will Work for Food", his playful sense of humor and willingness to do anything for a great meal earned him fans across the country.  He has also appeared on "The Best Thing I Ever Ate", "Chefs vs. City", and was a finalist on Season Four of Food Network’s breakaway hit "The Next Food Network Star". Adam is a gifted chef whose first restaurant, Philadelphia’s The Smoked Joint: A Barbecue Experience was named among Esquire magazine’s top new restaurants in the country.

These smoky homemade sausages have a bold flavor, made even better by pockets of cheese.

How to make Hot Dogs from Scratch

Learn the art and science of making hot dogs to create customizable, better-than-store-bought versions at home.

How to make Hot Dogs from Scratch

An Introduction to Hot Dogs and Sausages

Learn the distinguishing qualities of different types of sausages, and the similar ways they are prepared.

An Introduction to Hot Dogs and Sausages