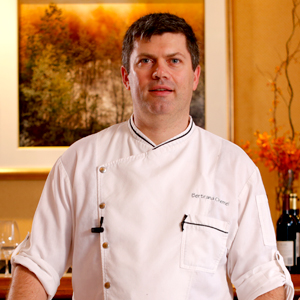 Bertrand Chemel is the executive chef of the critically acclaimed fine dining restaurant, 2941, in Washington DC. His menus showcase an elegant, contemporary approach to American cuisine by drawing influence from French and Mediterranean ingredients and techniques. Bertrand also leads the kitchen at the more casual Pizzeria Orso.

Growing up surrounded by farmland in the Auvergne region of France, Bertrand was exposed to fresh produce and farm-raised meats at an early age. This experience inspired an appreciation for high-quality ingredients, and helped shape his philosophy towards food and cooking. After spending his teenage years working in a local bakery, Bertrand decided to pursue a formal culinary education. Since then, he has worked in some of the finest restaurants in top culinary capitals including France, London, and New York where he accrued public acclaim, raving reviews, and even a Michelin star. Bertrand was also honored as a James Beard Awards Chef semifinalist for Best Chef: Mid-Atlantic in 2011.

Fresh semolina pasta topped with a rich wild boar sauce makes for a dish that is the ultimate comfort food.

Learn to long-marinate and slow-cook this unique cut of meat to make a decadent main dish using classic French techniques.

Wagyu beef is dressed with black truffle tapenade and garnished with a three-shallot vinaigrette, shaved macadamia nuts, and a bright endive salad.