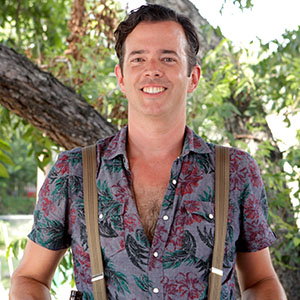 Brian Floyd is a bartender at Austin's craft cocktail bar, Weather Up. Weather Up has been named one of the "10 Best Bars in Austin" by Culture Map and one of "Austin's 24 Buzziest Brunch Places" by Eater Austin. He has worked as a bartender and consultant at many popular watering holes, including the stylish Vanderbilt and southern Italian restaurant, Red Gravy, both located in Brooklyn.

He is also the founder of The Barman's Fund, a group of bartenders who donate one night of tips per month to charity. Since its founding in April 2011, the Fund has raised over $180,000 for charity.

This classic cocktail gets punched up with the addition of a fruity drinking vinegar.

Update this classic whiskey cocktail with creative flavors guided by essential ratios to make a version for any palate.

Swizzling is an easy stirring technique used to make a simple drink with layers of flavor.

Using vinegar in cocktails adds a savory element and a surprising burst of flavor.

This tropical cocktail is the perfect fruity refreshment for a hot summer day.

Learn how to create a perfectly refreshing booze slush without ever touching a blender.

Boosted with the sweet and toasty flavor of fresh vanilla bean, this syrup will add subtle complexity to a variety of cocktails.

This bright and balanced cocktail is tart, sweet, and full of smokey mezcal flavor.

Learn about the different makes and origins of rum to find one that suits your personal tastes.

Despite their overlapping origins, mezcal is smokier, richer, and more nuanced than tequila.

This classic vodka cocktail has a kick of spiciness from fresh ginger syrup.

Use this simple technique to make flavored drinking vinegars and add brightness and acidity to your favorite cocktails.