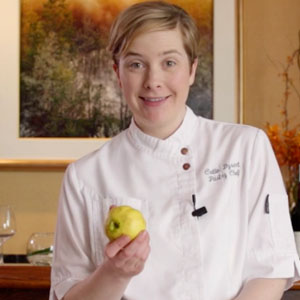 Caitlin Dysart is the pastry chef at celebrated upscale DC restaurant, 2941, where she combines her classic French training with modern New American flavors to create beautiful and unique desserts. In April 2013, Dysart was named as one of 50 Pastry Chefs in the U.S. to be nominated for Food & Wine magazine’s The People’s Best New Pastry Chef 2013 Award.

After graduating with degrees in Art History and French from Tulane University, Caitlin started working in the kitchen of a local pastry shop, Sucré. After completing formal training at the French Pastry School in Chicago, she returned to Virginia and began working at 294, first as a pastry cook, then as pastry sous chef. Dysart took the position of pastry chef after the renovation of 2941 in early 2012. Since then Caitlin has been awarded one of the highest honors in the DC area’s hospitality world, Pastry Chef to the Year at RAMW’s RAMMY awards. Among other accolades and honors, the James Beard Foundation Awards also named Caitlin as a semifinalist in 2015 for 'Outstanding Pastry Chef'.

Learn two easy and elegant preparations to maximize the flavor and texture of this delicious fruit.

This elegant homemade candy makes a beutiful gift, or a sophisticated end to a hearty meal.

This version of the classic American dessert combines toasted meringue with creamy ice cream and delicate chocolate cake for a show-stopping presentation.