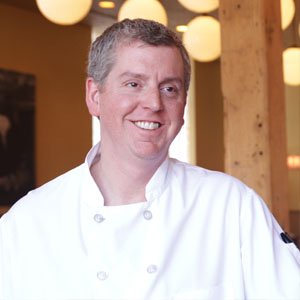 Chef Brian Huston is one of Chicago's premier chefs. As Chef de Cuisine at The Publican, he made a name for himself by sourcing local and sustainable meats, fish, and produce to create signature dishes. Author and celebrity chef Anthony Bourdain even named The Publican as one of Chicago's best spots. In 2011, Huston was nominated for Food and Wine's Best New Chef Award.

Huston grew up in Evanston, IL where he was naturally creative in the kitchen. He looked for different ways to spice up classic meals like his childhood favorite, BBQ spaghetti. Huston got his start working under Jimmy Bannos at Heaven on Seven in Chicago, then worked throughout San Francisco and Europe to hone his skills. After his lauded stint at The Publican, Huston has returned to his hometown of Evanston to open seasonal restaurant Boltwood with his brother.

This marinade uses Portuguese-inspired spices to create a simple and savory dish.

This gem salad is one of the staple dishes at the Publican Restaurant in Chicago.

How to Grill a Whole Chicken

"I'm going to show you how to grill and serve a whole chicken."

How to Grill a Whole Chicken