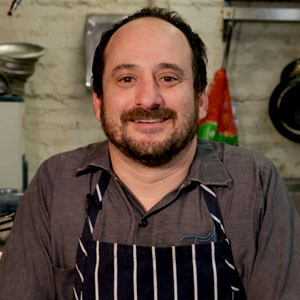 Chef Daniel Esses, Executive Chef of New Orleans hot spot Three Muses, has a self-described “life-time love affair with food.” His talent has taken him through numerous prestigious kitchens. After working with top chefs on the west coast and in France, including the three Michelin-starred eatery Le Grand Vefour in Paris, he returned to his hometown of New York City to work at the acclaimed Buddakan NYC. Chef Daniel then moved to New Orleans where he worked under celebrity chef John Besh at Restaurant August and eventually became Executive Chef at Frenchmen Street’s Marigny Brasserie. Before his adventures even started, he had graduated from the Natural Gourmet Cookery School in New York.

Now at his own place, Chef Daniel continues to channel his expertise with heart. His primary inspirations for Three Muses: the seasonal, locally grown ingredients found at the Crescent City Farmer’s Market and the live music that dances so well with his dishes.

Pork rinds and cracklings use the same cut of meat, but require different cooking methods. Both are salty, porky, delicious, and have a characteristic crunch.

Blue crab and horseradish add a Cajun twist to this classic favorite.

These cornmeal fritters are traditionally served with seafood, but can be flavored to compliment any meal.

Learn everything you need to know about blue crab, one of Louisiana’s signature ingredients.

Kimchi is a tangy, flavorful, fermented cabbage dish from Korea.

These cakes are juicy and dense with crab, making for an amazing entrée or appetizer.