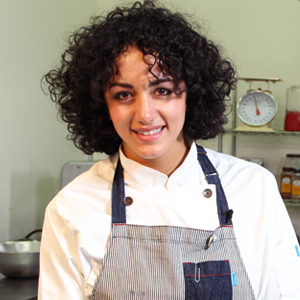 Born and raised in Mexico City, Elia Aboumrad made herself a household name as a fierce competitor on season 2 of Bravo’s “Top Chef.” Through her training at the prominent Ecole Lenôtre in Paris--where she received the prestigious ‘Grand Diplome’ and was the first student to complete the culinary degrees for every additional course offered at the school, 34 in total--Chef Elia developed a passion for fine French cuisine. She pays tribute to this passion at Gorge, a restaurant and charcuterie house that she co-owns and runs with her friend from culinary school, Chef Uyen Nguyen.

Prior to opening Gorge, Chef Elia worked under Joel Robuchon in Paris and, after several years of service, was awarded the position of Sous Chef in his restaurant. She was the first woman to ever receive such a prestigious position in his kitchen. Chef Elia left Robuchon to work as Executive Chef for The Hotel at Mandalay Bay. While there the restaurant received its fourth AAA Diamond. In 2008, Chef Elia received the “Universal Excellency Award” for artists who excel internationally in their fields.

How to Break Down a Pumpkin

“Pumpkin season is just once a year, so make sure to enjoy it and to have fun with it.”

How to Break Down a Pumpkin

A simple recipe for one of the most popular fall desserts.