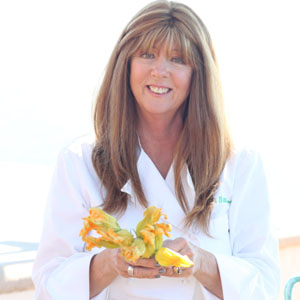 Geraldine Gilliland is a successful chef and entrepreneur who has built her businesses around expertise born through passion. She opened Santa Monica institution Lula Cocina Mexicana nearly 25 years ago after studying Mexican cuisine with namesake Lula Bertran, one of the best Mexican chefs according to Bon Appetit Magazine. Gilliland cemented her restaurant’s posterity with the Lula Cocina Mexicana cookbook in 2014.

Gilliland also owns and operates Finn McCool’s Irish Pub, a painstaking recreation of her late stepfather’s pub in Ireland, and Rancho Chiquita, an event and catering venue in the Santa Monica mountains. She also co-wrote the James Beard nominated cookbook Grills and Greens and has been featured in numerous publications. To keep up with Gilliland's new and expanding endeavors, visit her website.

How to Properly Make Chicken Fajitas

"One of the most popular dishes in Mexican restaurants in California."

How to Properly Make Chicken Fajitas

"A really delicious Mexican appetizer... It's like a Mexican cheese fondue."

"This is the most popular tamale that we serve at Lula. It's simple green corn and can be made at any time of the year."

How to Make a Traditional Mexican Flan

"This flan is one of the richest, stick-to-your-mouth flans that you'll ever taste."

How to Make a Traditional Mexican Flan

How to Properly Make a Blood Orange Margarita

A unique citrus twist on a classic drink.

How to Properly Make a Blood Orange Margarita

How to Make Pico De Gallo

This classic dish works as a great dip, garnish, or side.

How to Make Pico De Gallo