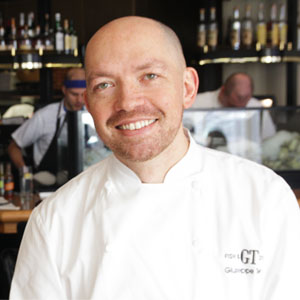 Giuseppe Tentori is an award-winning chef known for creating perfectly executed dishes that are complex but accessible. He is currently Executive Chef and Partner of GT Fish & Oyster, which opened to acclaim in 2011, and Executive Chef of BOKA Catering Group.

Tentori had previously been Executive Chef at BOKA, a Michelin-starred Chicago staple for American fine dining. Shortly after taking the helm, he was named “Best New Chef” by Food & Wine magazine. Before that, he worked at the world famous Charlie Trotter’s for nine years. Tentori began his career under Chef Gabriel Viti, who invited a then 19-year old Tentori to move from Milan to work at his Highland Park, IL restaurant.

A light and easy appetizer with major wow factor.

A perfect, versatile spread for many dishes.

A simple and delicious clam chowder made from great ingredients.

How to Prepare Mussels

Perfect with crusty bread and rich broth, mussels make for a delicious and simple meal.

How to Prepare Mussels

How to Shuck an Oyster

Understanding how to properly shuck an oyster will help prepare you to make a variety of dishes.

How to Shuck an Oyster