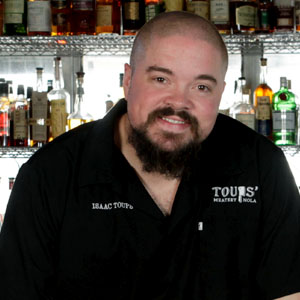 Isaac Toups is head chef and co-owner of Toups’ Meatery in New Orleans. At Toups’, Isaac serves up the hearty, Cajun-type of food he loves most, like crispy cracklins’, artistically epic charcuterie boards, and confit chicken thighs with white beans, greens, and gizzard gravy . According to Zagat, “if you’re a carnivore, this is your restaurant.” Toups’ Meatery has received rave reviews from fans and critics alike. In 2010, Times-Picayune called Isaac a ‘Chef to Watch.’ Recently, Isaac was named as a James Beard Award Semifinalist for Best Chef in the South.

Born and raised in Rayne, Louisiana, or born and braised, as Isaac jokes, to a food-centric family, Cajun has always coursed through Toups’ veins. He credits his mom and grandmother for his early start in cooking, but it was Emeril who gave Toups his professional start as a cook at his restaurant, Delmonico’s. Over the course of a decade, Toups worked his way through the ranks, all while perfecting his craft. In 2012, Toups and his wife bought Toups’ Meatery, where they have been making a name for themselves ever since.

Soaked in brine and cooked twice, this cut of meat is moist, tender, and packed with flavor.

In this dish, goat meat is bathed in its own broth to create juicy and flavorful results.

Pimento cheese adds a unique twist of creamy heat to this party favorite.

How to Perfectly Boil an Egg

A boiled egg is easy to prepare, and adds flavor and texture to a wide variety of recipes.

How to Perfectly Boil an Egg

“Everybody gets intimidated by these terrines, but they’re easy to make, very rewarding, and if you do ‘em just right, they look pretty, too.”

How to Break Down a Whole Goat

Mastering this technique will provide essential insight into goat as an underrated but versatile protein.

How to Break Down a Whole Goat