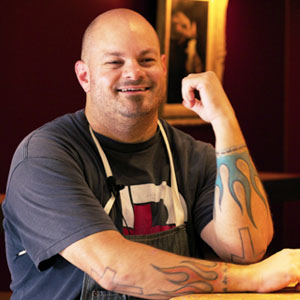 Chef Jason Travi is one of the most exciting chefs in Los Angeles. His food is a fresh reflection of his Italian heritage, New England upbringing, French culinary training, and Southern California location--all with a strong dose of modern comfort.

Travi made his imprint on the Los Angeles dining scene in 2007 when he opened the French-inspired Fraiche, named “Best New Restaurant” by Los Angeles magazine.  Before then, he worked under culinary legends Wolfgang Puck and Gino Angelini.

A third generation chef, Travi began his career washing dishes at his family's restaurant in southeast, MA.  He graduated from the prestigious Culinary Institute of America.

A comforting classic, layered with flavorful herbs and savory bacon.

This combination of creamy mozzarella and sweet peaches serves as an amazing meal or appetizer.

"This recipe is basically breakfast for dinner--it's scrambled eggs, bacon, and a maple custard."

This dish is as flavorful as it is easy to make, and the taro chips add the perfect crunch.