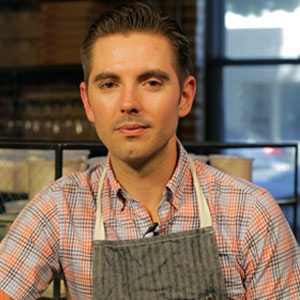 Chef Jeff Mahin has been instrumental in putting Los Angeles pizza on the map. His pizza dough has become what Forbes magazine calls “a centerpiece of the insurgent pizza revival in Los Angeles."  With that accomplished, Mahin has been on his way to becoming a national star. As a Chef-Partner of Lettuce Entertain You Enterprises, he has been the creative force behind Stella Barra Pizzeria and M Street Kitchen in Los Angeles as well as Do-Right Donuts in Chicago. Some of his industry accolades include being named to Zagat's “30 under 30,” making Forbes' “30 under 30” list of hospitality industry up-and-comers in 2012, and being one of Restaurant Hospitality’s 13 chefs to watch in 2013.

Having majored in science and math at Berkeley, it's no wonder that Mahin takes a more scientific approach to food. For example, he experimented with thirty different varieties of dough until he landed on the perfect one for Stella Barra. Before becoming a restaurateur, he attended the California Culinary Academy and trained in some of the country’s best restaurants including Nobu in New York City. In 2013, he competed on ABC’s The Taste where he dazzled audiences with his creative dishes.

Mahin's Stella Barra has locations in Chicago, Hollywood, and Santa Monica. In 2013, he opened the California-influenced restaurant Summer House in Santa Monica.

"One of the key things in food is simplicity. This dish right here is as simple as cheese, grapes, and bread."

"Today we're gonna show you how to shape a pizza."

"The really cool thing about the no-knead recipe is that you only need [a] bowl and your two hands, that's it."