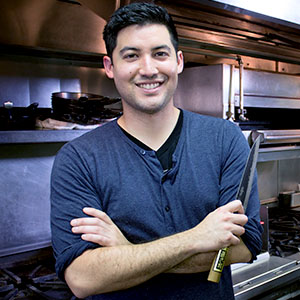 John-Carlos Kuramoto was just 23 years old when he created a 12-course tasting menu for his prospective boss that was so stellar, it helped him clinch the head-chef position at Santa Monica’s venerable institution Michael’s. Still there after almost three years, Kuramoto has gained a reputation for delivering high-end contemporary American dishes with a modern, California flair. His mentors include famed chef Ming Tsai, with whom he trained under at Blue Ginger in Massachusetts. After Kuramoto moved to Los Angeles, he worked at Michael Cimarusti’s two Michelin-starred restaurant Providence and Mark Peel’s critically acclaimed Campanile. Kuramoto attended the Culinary Institute of America. He recently appeared on “Knife Fight,” a chef competition show on the Esquire Network.

This playful take on chicken and waffles delivers all the same flavors of the classic combo in finger-food format.

This delicately flavored fish cooks up quickly, making for a fresh and healthy main dish.

This salad incorporates creamy burrata cheese and black Tuscan kale for a diverse mix of textures and flavors.