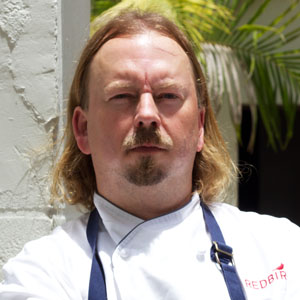 Neal Fraser is currently the executive chef and co-owner of Los Angeles power spot BLD, which LA Weekly called “the most useful restaurant of our time.” He is also the executive chef and partner of the purist gourmet venture Fritzi Dog, Redbird, and is about to launch several other ventures while consulting on numerous others.

Fraser has long shown an aptitude for culinary entrepreneurship. Before opening BLD, Fraser launched the successful contemporary American eatery Grace. And before that, he had opened two other restaurants, Boxer and Rix, to rave reviews. He graduated form the Culinary Institute of America in New York, and honed his skills working under acclaimed chefs, such as Wolfgang Puck.

"Definitely one of my favorite things to do in the summertime is eat scallops with succotash."

A refreshing chilled soup that highlights the great flavor of the avocado.