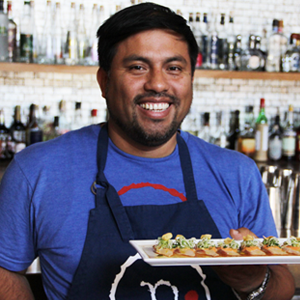 Known for his immaculate technique and creativity, Chef Ricardo Zarate is regarded as one of the most celebrated ambassadors of Peruvian cuisine in the country. His three restaurants around Los Angeles, all with unique approaches to the dishes from his native Peru, have earned him local and national acclaim. In 2011, Zarate was named by Food and Wine as "Best New Chef."

Zarate grew up as one of 13 siblings in Lima, Peru, and later went on to study at his country's top culinary school, Instituto de las América. He has worked at top restaurants around the world, melding both techniques learned alongside his mother and grandmother in Lima with advanced French and Japanese techniques learned throughout his professional life.

This is a classic Peruvian dish of thinly sliced fish.

"I'm going to show you techniques on slicing fish and also some secrets on how to use the knife."

"A causa is a cold potato salad."