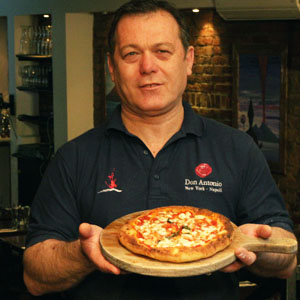 When he’s not instructing others, Caporuscio heads up his own Kesté Pizza & Vino, which New York magazine heralded as having one of the city’s best pizzas. He is also partner in the critically acclaimed Don Antonio by Starita which he opened with his mentor Antonio Starita.

Caporuscio was a farmer and mozzarella cheese maker in Italy before he attended pizza school at age 37.

Learn how to make fresh mozzarella from a chef who was a cheese maker in Italy for many years.

A homemade dough can completely transform the flavor of a pizza.

A master of pizza teaches how to make the perfect tomato sauce.

A true taste of Italian history.