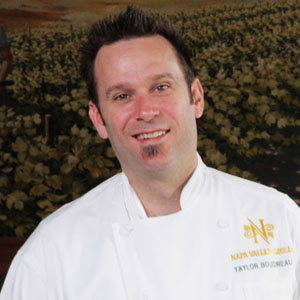 Chef Taylor Boudreaux has earned his lauded status in the restaurant industry. For years he worked for legendary chef Wolfgang Puck, and from that experience has gone on to prepare menus for numerous A-list Hollywood events. In 2009, he won the Sante Award for Excellence in Wine Hospitality. He also worked as the Sous Chef at the fine-dining restaurant, Mastro's, in Arizona, and went on to become the Executive Chef at the restaurant's Beverly Hills location. He is currently the Executive Chef at Napa Valley Grille in Los Angeles, CA.

Growing up a Navy brat, Boudreaux traveled around the country with a fork in his hand. His cross-country experiences, combined with his family’s Cajun background, fostered Taylor's culinary passion which ultimately landed him at the Scottsdale Culinary Institute in Arizona. His “let the food do the talking” style has gained him a loyal following.

The combination of bacon, brussels sprouts, pistachios, and egg creates a creamy and simple winter salad.

"A spicier version of tartar sauce."

"One of the simplest sauces there is."

This seafood staple is made from fresh ingredients and garnished beautifully.