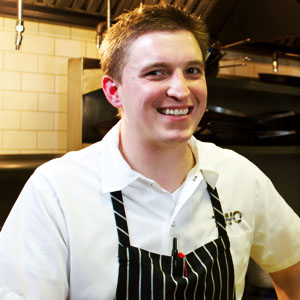 With his Midwestern point of view and a dash of urban panache, Chef Tom Van Lente proves that you don't have to be on a coast to experience the best that food has to offer. As the Executive Chef of Two restaurant in Chicago, Van Lente curates the rural, Midwestern farm-table experience by elevating the best, freshest ingredients available using classic culinary technique. Two was recently placed on the prestigious Michelin Bib Gourmand list of restaurants in Chicago for 2015, a short list that recognizes restaurants offering quality food at affordable prices. In 2013, he was nominated for the Jean Banchet rising chef award.

Van Lente grew up in Burr Ridge, IL where he learned about food and hospitality from his family. After receiving a degree in public communications from DePaul University, he attended Kendall College in Chicago to pursue his culinary passion. Van Lente has worked at esteemed restaurants throughout the Chicago area but has found his home at Two.

"An extremely traditional garnish, very Italian, and with a million different purposes."

How to Properly Make Risotto

"Most people think risotto is a dish but actually, it's a technique."

How to Properly Make Risotto

"You can really taste the smoke of the bacon, the freshness of the cauliflower, the peppery-ness of the arugula, and the salt of the Parmesan."