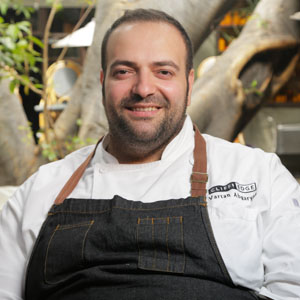 With Mediterranean flavors and a California coastal style, Chef Vartan Abgaryan crafts dishes that evoke an emotional response. He is the Executive Chef at Cliff’s Edge, a long-standing neighborhood restaurant in Los Angeles with an Italian/Mediterranean style. He took over Cliff's Edge in 2012 and has refreshed the menu with local California flavors, making the food homey yet updated.

Born in Armenia, Abgaryan moved to the U.S. when he was 10 years old. He originally went to college to become a doctor, but during this time, he also waited tables which is when he fell in love with food. He then attended Le Cordon Bleu and worked under famed chef André Soltner at his restaurant Lutèce. Abgaryan's favorite meal is Sunday dinner when his father cooks the traditional Armenian food of his childhood.

"It's such a base recipe that you can flavor it any way you want."

How to Make a Vegetable Purée

"We're gonna learn how to make a vegetable purée using the actual juice from the vegetable."

How to Make a Vegetable Purée

How to Break Down an Octopus

"This is a great technique to use to cook octopus if you've never done it before."

How to Break Down an Octopus

How to Cook and Break Down a Lobster

Learn a simple technique for cooking and breaking down a fresh lobster.

How to Cook and Break Down a Lobster

How to Bake Vegetables in Salt

How to Bake Vegetables in Salt