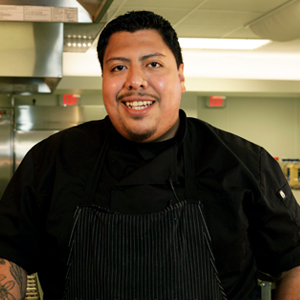 Daniel Espinoza, a Chicago native, grew up cooking alongside his mother. By 16, he knew he wanted to be a chef, so he enrolled at CIA right after graduating high school. Despite loving it there, three months later, he decided to move back home, not only to be closer to family, but to pursue the education and the degree his mother was not able to. After gaining his Bachelor's in Culinary Arts from Kendall College, Espinoza began working at Carmichael’s Steak House. From there, he set off to acquire experience around the world, landing jobs working at Bistro des Saveurs in France, Ausable Club and Wolf & Lamb in New York, and The Drawing Room and Mexique in Chicago.

At present, Daniel Espinoza is Dinner Lab’s Chef de Cuisine. Dinner Lab, a nationwide pop-up supper club, gathers diners at luxurious locales to sample fare from up-and-coming, buzzworthy chefs. As Chef de Cuisine, Daniel is treating guests to the Mexican cuisine of his heritage, but with a more modern, lust-worthy twist. His aim is to produce approachable, humble food, without the pretentiousness often associated with fine dining. Chef Daniel’s artfully arranged, and creatively inspired dishes prove that Mexican food can be slow, inventive, and worthy of the classic culinary community’s praise.

How to Make Blackberry Mole

Layers of distinct ingredients are blended together to form a complexly flavored, multi-purpose sauce.

How to Make Blackberry Mole

Mastering this fundamental cooking technique will allow you to produce delicious sauces that perfectly compliment any dish.

This polenta is rich and comforting, with a touch of citrusy brightness.