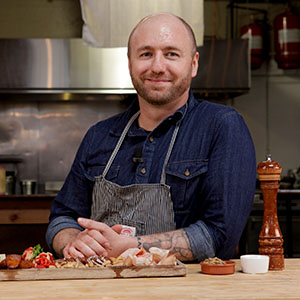 After working in his father’s restaurants growing up, Chef Elias worked as an apprentice to Chef Annergret Schlumpf in Switzerland, starting at age 20. During his time in Switzerland, he learned classic culinary techniques with a particular focus on butchery and charcuterie. After working in Greece, he headed back to the United States and began working as a line cook at Portland’s distinguished bistro Castagna where he quickly worked his way up to Sous Chef. Chef Elias has a passion for creating delicious meats and charcuterie and has turned that passion into a thriving business.

Learn the foolproof technique for cooking sausage perfectly every time.

Grinding your own meat gives you flexibility with flavor and texture, and gives you total cotrol over what's going into your recipe.

One basic preparation with a few additional steps results in two delicious and meaty dishes.

Learn how to balance flavors and textures to create the perfect charcuterie board.

Making salami can be challenging, but the right equipment and proper technique will result in a delicious cured product.