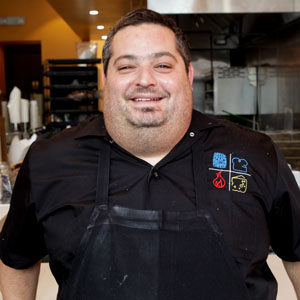 Eric Greenspan is known for his bold and imaginative approach to food, striving to make the innovative concepts of fine dining accessible to everyone. He began his bout in the restaurant business as a dishwasher at Café Med in Berkeley. Two weeks later, Greenspan took over as head chef and general manager and for the next three years, helped the restaurant generate over $1 million dollars in revenue.

Upon graduating from UC Berkeley’s Hass School of Business, Greenspan attended the famed Le Cordon Bleu in Paris. After training under some of New York’s best chefs, Greenspan apprenticed for three-star Michelin Chef Ferran Adria at El Bulli in Spain. In 2003, Greenspan became executive chef at the renowned Patina restaurant in Los Angeles. While there, Angeleno Magazine also called Greenspan one of “Eight Hot Chefs,” and the restaurant earned a place in Zagat as one of the top-ranked French restaurants, boasting an impressive 27/30 score. In 2007, he opened The Foundry on Melrose to rave reviews, including “Best New Restaurant” by Condé Nast Traveler, Top 75 by Los Angeles Magazine, and semi-finalist in The James Beard Foundation’s Best New Restaurant in America.

Eric has been featured in a variety of publications including The New York Times and Wine Spectator, and has been named “Most Buzzworthy Chef in America” by 944 Magazine. His most recent culinary endeavors include The Roof On Wilshire and Greenspan’s Grilled Cheese. As the 2008 winner of the Grilled Cheese Invitational, his newest, fast-paced eatery is a ‘must try.’ Eric hosts a show on Nat Geo called "Eric Greenspan is Hungry" and has appeared as a competitor on "Iron Chef America" where he defeated Bobby Flay.

The Roof on Wilshire

The unexpected combination of sweet and salty gives this simple, multi-purpose spread a complex and delicious flavor.

This sauerkraut recipe is quick, simple, and can be used to top meats or used in soups and sauces.

How to Make Tuna Salad from Scratch

Making your own tuna salad allows you to know where the fish came from and that it's fresh.

How to Make Tuna Salad from Scratch

The Basics of Pressure Cooking

Pressure cooking uses the power of steam to accelerate the cooking process without compromising the flavor, texture, or quality of a dish.

The Basics of Pressure Cooking

“You can’t mess up a tuna melt. It’s pretty easy. As long as your tuna salad is right, you’re going to be okay”

"I took all the elements of a fancy cheese plate and put them into a sandwich."