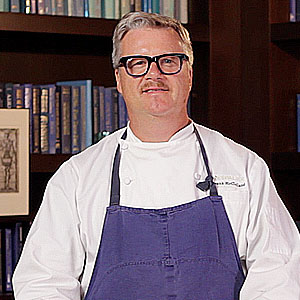 Chef Frank McClelland is the head chef and proprietor of L’Espalier, one of the most famously esteemed restaurants in the New England area. In addition to being globally recognized for developing some of the top culinary talent in the country, Frank is also the author of a James Beard Award-winning cookbook, "Wine Mondays: Simple Wine Pairings and Seasonal Menus."

Frank's culinary philosophy is that food is best in its purest form, and cooking should enhance the natural character of an ingredient. Growing up on his grandparents' farm in New Hampshire inspired Frank’s respect for regional, wholesome ingredients and a passion for cooking them at an early age. By his mid-twenties, Frank had already established himself in the kitchens of several acclaimed Boston Restaurants, including L'espalier. Since then, Frank's culinary endeavors have earned acclaim from publications such as Zagat, Forbes, Food & Wine, Bon Appétit, Wine Spectator, Condé Nast Traveler, and many others.

How to Make a Consommé

Learn how to make this classic French clarified soup - the "Rolls Royce of broths".

How to Make a Consommé

Poaching halibut in butter makes it tender and delicious; pairing it with a smokey tomato sauce makes it irresistible.

Succulent lobster meat paired with crispy lettuce offers a taste of New England with each bite of this savory salad.