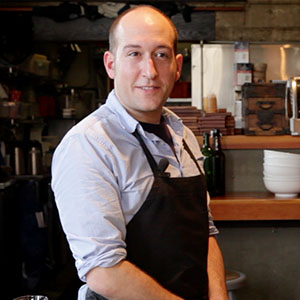 Chef Gabriel began working in the restaurant business in 1995 while studying at University of Iowa. Chef Gabriel graduated from the Western Culinary Institute in Portland in 1998. He then rotated through several well known Portland kitchens including stints at L’Auberge, Saucebox, Fratelli Ristorante & Bar. He also worked as a butcher at craft butcher shop, Viande Meats.

How to Break Down and Work with Daikon Radishes

This versatile root, commonly found in Asian cuisine, has a clean apple-like texture with a smooth radish flavor.

How to Break Down and Work with Daikon Radishes

This simple dish is perfect as a fast, casual meal or as a snack served with a drink.

How to Make Traditional Gyoza

Learn how to make these traditional, pan fried and steamed Japanese dumplings.

How to Make Traditional Gyoza

This salad is a light, sweet, and tangy side dish, perfect for a Japanese style meal.

An Overview of Yakitori

This traditional Japanese food proves "fast food" can be flavorful, healthy, and delicious.

An Overview of Yakitori

How to Clean Up a Beef Hanger Steak

Learning how to trim unwanted parts off a hanger steak will allow you to fully utilize this flavorful and versatile cut of beef.

How to Clean Up a Beef Hanger Steak