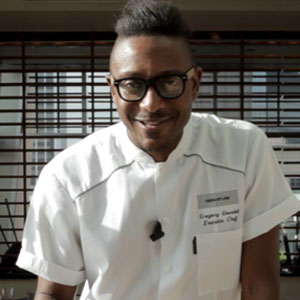 Born and raised in Queens, New York, Gregory Gourdet is the Executive Chef at Portland’s modern Asian rooftop restaurant and lounge, Departure. At Departure, he is known for his ingredient-driven Asian cuisine, as well as offering gluten-free, vegan, and paleo menus along with the nightly dinner menu. Chef Gregory proved to be a tough competitor as runner-up on season 12 of Top Chef. He was named 2012’s Hottest Chef in Portland by Eater and in 2013 he was named Chef of the Year by the Oregon Department of Agriculture.

After attending the Culinary Institute of America in New York, Chef Gregory worked in the kitchens of the prestigious Jean-Georges Restaurants. After moving to Portland, Chef Gregory was Chef de Cuisine at modern steakhouse Urban Farmer Restaurant at the Nines Hotel. He took a position as Executive Chef of the hit restaurant, Saucebox, where he honed his skills working on Pacific Island cuisine. He later became the Chef de Cuisine and then Executive Chef at Departure. Chef Gregory is committed to nutrition and a healthy lifestyle and can often be found practicing hot yoga or trail running in Portland’s scenic mountains.

The contrasts between crispy skin and tender meat, bitter char and sweet soy sauce, make for a dynamic and sophisticated dish.

This traditional bibimbap is served in a hot stone bowl, allowing the texture of the ingredients to continue to transform while you eat.

This classic Japanese sauce is the perfect umami compliment to chicken, vegetables, or fish.