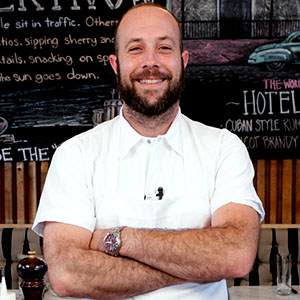 Jared Levy is the executive chef at the farm-to-table, rustically charming Eveleigh on the Sunset Strip. Chef Jared helped open Eveleigh in 2010 as executive sous chef and has been an integral part of developing the restaurant’s market-driven, local menu. As executive chef he has expanded Eveleigh’s relationships with local farmers, fishermen, artisans, and vendors to help uphold the restaurant’s locavore, sustainable philosophy. Eveleigh has been called “understated and chic” by Eater LA and honored by Angeleno Magazine with a Restaurant Award for “Best Atmosphere.”

Raised in New Jersey, Chef Jared has lived and worked in Los Angeles for the past 20 years. His professional culinary career began while living abroad in Japan where he observed the melding of Japanese and French flavors at β. After returning to the states, he graduated from Le Cordon Bleu and was part of the opening team at Michelin star Los Angeles eatery, Providence. Before joining the team at Eveleigh, Chef Jared was executive chef at popular Downtown Los Angeles wine bar, Bottle Rock, and chef de cuisine at chic Asian-fusion restaurant, Blue Velvet.

This texturally diverse salad is hearty, healthy, warm, and delicious.

This slightly sweet, all-natural condiment is a delicious and creative alternative to ketchup.

How to Make Burger Buns From Scratch

This fresh and fluffy bun is the perfect partner for your favorite burger.

How to Make Burger Buns From Scratch