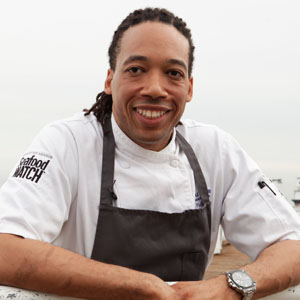 Fullilove’s passion for food grew partially from his cultured childhood experience. Born and raised in Cleveland, Ohio, Fullilove spent the remainder of his youth in Massachusetts, New York, and Zambia in Southern Africa. He then enrolled at New York’s Culinary Institute of America, but before obtaining his degree, was offered the Chef De Cuisine position at the Ritz Carlton USVI in St. Thomas. He took the job and gained key executive experience through the management of the resort’s onsite restaurants.

In 2009, Fullilove moved to California to serve as Executive Chef of highly regarded restaurant Campanile before continuing on as Executive Chef for the Los Angeles County Museum of Art. While at LACMA, Fullilove opened up his own art-inspired pop-up restaurant, RED, where he created ever-changing tasting menus that showcased the local, organic, seasonal, and farmer-centric mentality that so inspires him.

Jason Fullilove is now the chef and owner of Ethereal Plate, before which he worked as the executive chef of Malibu Pier Restaurant & Bar in Malibu, California. Chef jason serves fresh and innovative New American cuisine, placing an emphasis on sustainability through locally-sourced ingredients. With write-ups in Food & Wine, the LA Times, and Time Out, Fullilove is becoming a topic of conversation. Fullilove’s commitment to wild, organic, and natural products remains at the forefront of each of his culinary endeavors. Keep current with all things Fullilove by visiting his website, etheralpalate.com.

How to Properly Poach an Egg

Poached eggs are delicious on their own, on top of salads, or coated in hollandaise as eggs benedict.

How to Properly Poach an Egg

“I like this sandwich because it’s light. You can have your whole breakfast in the palm of your hand."

An Introduction to Eggs

Eggs are a simple, wholesome ingredient with many uses and preparations.

An Introduction to Eggs

How to Properly Fry an Egg

With a little practice, this technique will give you a properly cooked, perfectly simple egg, every time.

How to Properly Fry an Egg

These breakfast potatoes incorporate caramelized onions for the perfect breakfast balance of sweet and savory.

How to Make a Perfect Omelette

This omelette is made perfectly soft and fluffy by whisking the eggs with water instead of milk or cream.

How to Make a Perfect Omelette

This spin on a classic uses smoked salmon instead of Canadian bacon, and makes for a hearty, filling breakfast.

How to Properly Temper Eggs

Tempering gently brings up the temperature of raw eggs to create a thick, velvety emulsion.

How to Properly Temper Eggs

This delicious salad combines seared yellowtail tuna with a poached egg for a protein-rich, healthy meal.

How to Make Clarified Butter

Clarifying butter removes the milk fats and raises the smoke point, allowing you to cook with butter over high heat.

How to Make Clarified Butter

The braised vegetables in this scramble add a depth of flavor and texture, making for a hearty, yet healthy breakfast.

How to Make Perfect Scrambled Eggs

Learn how to make perfectly light and fluffy scrambled eggs.

How to Make Perfect Scrambled Eggs