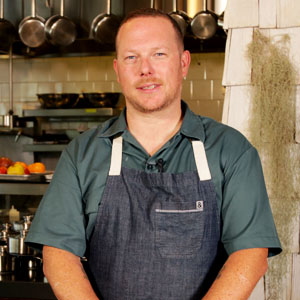 Jason Neroni is the head chef and co-founder of Catch & Release, a restaurant in Marina Del Rey featuring New England-style seafood dishes inspired by Jason's California upbringing. Jason's accolades include the title of Eater’s 2012 “Chef of the Year” and a James Beard Award for his contribution to the cookbook “Notes from a Kitchen.”

Jason’s career began in Disneyland, where he took a catering job at 16 with the sole intention of having free access to the park. The job uncovered a passion and aptitude for cooking that led to a three-year culinary apprenticeship at the park. Since then, Jason has worked in many notable kitchens in Los Angeles, New York, and Europe, including Le Cirque, Blue Hill, Essex House, the Tasting Room, and three-Michelin-star restaurants across Europe. Jason is also the former owner and executive chef of the critically acclaimed 10 Downing Food & Wine in New York City and Superba Snack Bar in Venice, California.

This colorful stovetop seafood dish offers the same rich flavor as a traditional clambake in a fraction of the time.

Learn how to make a spicy, modernized version of this classic seafood pairing.

This creamy, tangy dipping sauce is a match made in heaven for seafood.

This classic Canadian comfort food gets a New England makeover with a creamy cod chowder in place of gravy.