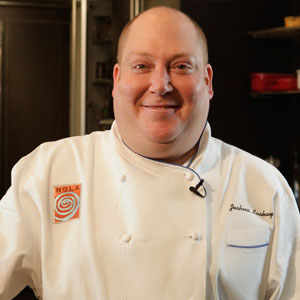 Josh Laskay, a native New Orleanian, was born to travel-loving parents who introduced him to global cuisine at a young age. Constantly encouraged to try new and uncommon ingredients, Laskay’s love for food became deep, exploratory, and only continued to grow with age. After high school, Josh began working in the restaurant industry, climbing his way from bartender to line cook. Eventually, Laskay was hired by Emeril Lagasse to be the butcher at his wildly popular and prestigious restaurant, NOLA. In 2004, he was promoted to sous chef and in 2007 to executive chef. In 2009, Laskay became Chef de Cuisine, a position he currently holds and excels in. As NOLA’s team leader, Laskay stays true to traditional Creole flavors while simultaneously introducing diners to tastes from the far East.

"Miss Hay made these as a snack for Chef Emeril, and he loved them so much he put them on the menu."

Cooking with rendered bacon fat infuses a rich, smokey, savoriness into any dish.

“Confit is technically cooking something in its own fat.”

The creamy freshness of ricotta pairs well with both savory and sweet dishes, making it a great addition to any chef’s repertoire.

The natural pocket shape of the chicken wing makes for a delicious, edible vessel for your favorite filling.

This creamy soup provides rich oyster flavor with the perfect hint of herbsaint.