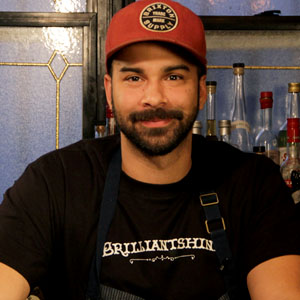 Julian Cox is an award-winning mixologist and the creative mastermind behind many of Los Angeles’ best cocktail programs, including Picca, Sotto, Short Order, Bestia, Petty Cash, and Santa Monica’s Brilliantshine. Cox became serious about his spot behind the bar during a stint as a server at Comme Ca, a French restaurant on Los Angeles’ West Side, when elite bartenders were brought in to train their staff on all things mixology. Cox became inspired by their craft, careful skill, and use of fresh ingredients and was given the opportunity to trade in his servership for a position as bartender; there he fell in love.

In 2009, after honing his skills at Comme Ca, Cox was hired by Chef John Sedlar to develop the bar program for his downtown restaurant, Rivera. While at Rivera, Cox earned a 2010 Rising Star Award and a 2012 nomination for Tales of the Cocktail’s Best Restaurant Bar. His success only snowballed from there, first with an invitation to develop proprietor Cedd Moses’s trendy mixology haven, Las Perlas, and then on to create bar programs for highly lauded restaurants across the city.

Cox pays close attention to detail and, using menus as inspiration, has created cocktails to go with everything from Peruvian fusion to French fare.

This fizzy drink is a mix between a dessert and a cocktail, made with a presentation that is sure to impress.

Whisky is the star of this refreshing, slightly sweet but tart cocktail.

How to Carbonate a Liquid

With a few easy to find tools, you can turn any flat beverage into a fizzy liquid masterpiece.

How to Carbonate a Liquid

How to Make Simple Syrup

This simple syrup is made quickly, without heat, making it extremely easy to master and to use almost instantly.

How to Make Simple Syrup

Everything You Need To Know About Whiskey

Understanding the different makes and origins of whiskeys will enable you to identify the nuances of its flavor, and hone your preference for one type over another.

Everything You Need To Know About Whiskey