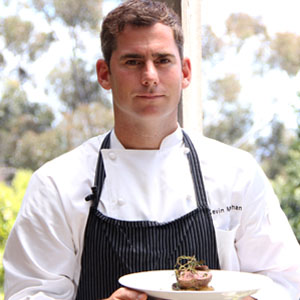 Kevin Meehan is the executive chef and brains behind Kali Dining, an underground, pop-up, gourmet dinner party hosted in Los Angeles. Kali Dining brings strangers together in an intimate setting to enjoy the fruits of Meehan’s labor. Venues vary, as does the menu, so diners can always expect a surprise. Kali Dining has been featured in the Los Angeles Times, LA Weekly, and Eater LA, and has grabbed the attention of LA foodies. It has received rave reviews within the community, boasting five stars on Yelp and a perfect 100% Urbanspoon score. Sign up for the newsletter on Kali Dining’s website to receive drool-worthy images, updates, and the chance to be the first to snag a ticket to his next event.

Meehan grew up in New York, where he spent the majority of his time saltwater fishing and working the line at a fast food restaurant. After high school, he enrolled at Johnson and Wales, one of the East Coast’s most prestigious culinary institutions. Upon graduating, Meehan headed to Europe for an apprenticeship at a Michelin-starred restaurant. He spent the following decade honing his skills, working under some of the most talented chefs in the country. His resume includes stints at Patina, Bastide, and L’Orangerie. During his tenure as head chef of Downtown LA's highly regarded Cal-French eatery, Cafe Pinot, the Downtown News awarded the restaurant with the title of “Best French Food 2011.”

This burnt onion jam is savory and smoky, and can be served with french fries, vegetables, or on top of a steak.