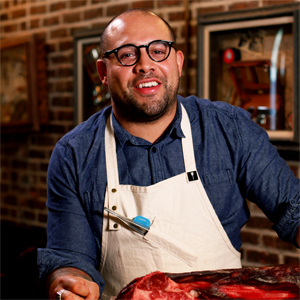 Luke Reyes is is currently the chef and co-owner of a soon-to-be-opened Japanese-American fusion restaurant, Oh Man! Ramen. He is also the former executive chef at Butchers & Barbers in Hollywood, and in 2013, was a victorious contestant on Food Network’s “Chopped”.

Originally pursuing a career in hospitality, Luke found his passion for cooking and the beginnings of a fruitful culinary career working in acclaimed restaurants around Boston. After spending time under the wing of a James Beard Award winning chef, he moved to Los Angeles where he began developing relationships with farmers and local food artisans. This, among other influences, eventually inspired him to open Corner Door in Culver City, and later, Butchers & Barbers in Hollywood.

This earthy and elegant dish highlights the flavor of meaty rib eye and savory mushrooms in a rich sherry sauce.

An Introduction to Persimmons

Persimmons are a versatile fruit that can be used in sweet or savory preparations and are available in two varieties in the United States.

An Introduction to Persimmons

How to Use a Smoking Gun

Learn to infuse smoky flavor into food without the use of bulky, expensive equipment.

How to Use a Smoking Gun

Sweet persimmons are paired with roasted squash, balanced with creamy burrata, brightened with tart lemon, and enhanced with smoky trout roe for a salad worthy of main-course attention.