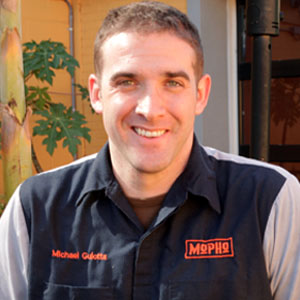 Gulotta was born and raised in New Orleans and found a love for Creole and Cajun cooking at a young age. While pursuing a degree in culinary arts, Gulotta climbed his way through the ranks at Chef Folse’s Lafitte’s Landing. After graduating, Gulotta was given a position at John Besh’s restaurant, August. With Besh’s recommendation for more worldly experience, Gulotta first set off to work at Italy’s Restaurant Giunchetto, and finished with an apprenticeship in Germany under Chef Karl Josef Fuchs. In 2007, upon his return to New Orleans, Gulotta was promoted to Chef de Cuisine at August.

Michael Gulotta is now running his own highly praised restaurant, MoPho, in the heart of New Orleans. At MoPho, which opened in 2014, Gulotta is serving up Southeast Asian eats with Louisiana flair. Committed to sourcing the best, local produce, and producing the finest quality meals, Gulotta focuses on sustainability and strengthening the local economy. MoPho was named 2014’s Restaurant of the Year by MyNewOrleans.com has has been featured on Eater New Orleans, Best of New Orleans, and NOLA.com.

An Overview of Tofu

Tofu is easy to prepare, and makes for a healthy, delicious, and satisfying meat substitute.

An Overview of Tofu

How to Break Down and Cook Eggplant

How to Break Down and Cook Eggplant

An Overview of Common Kitchen Pans

An Overview of Common Kitchen Pans

An Overview of Caramelized "Loves"

These flavorful, caramelized "loves" can be made in advance and then added to dishes to enhance their flavor.

An Overview of Caramelized "Loves"

How to Make Vietnamese Pho

This traditional, one-pot, Vietnamese dish is savory, comforting, and bursting with luxurious layers of robust flavor.

How to Make Vietnamese Pho