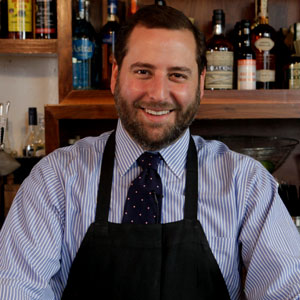 Neal Bodenheimer is a master mixologist and co-owner/founder of three award-winning bars in his hometown of New Orleans: Cure, Belloq, and Cane & Table. Bodenheimer got his bartending start at The Atlantic Grill in New York City. There the passion for well-crafted cocktails he cultivated as a young traveler grew into surety that this would be his career. In 2006, with experience in tow, Bodenheimer returned to New Orleans, built a partnership with Matthew Kohnke and Kirk Estonpinal and in 2009, opened Cure on Freret Street. In addition to receiving overwhelming acclaim, Cure helped to spur development in what once was an unfavorable neighborhood; Freret is now a thriving, go-to area, and Cure is one of its mainstays.

Among the teams' most recent successes are the openings of Bellocq in the Warehouse District and Cane & Table in the French Quarter, both of which opened to rave reviews. Cane & Table was named among the 8 Best Southern Cocktail Bars by Conde Nast Traveler, and both Cure and Cane & Table were featured as Top Bars in New Orleans by Travel + Leisure. Bodenheimer’s New Orleans cocktail preservationist spirit inspires the creativity that has earned him features in Food & Wine, and a Best Bar award by Esquire. Bodenheimer is currently a 2015 James Beard Foundation Award semifinalist.

“The Sazerac is an iconic New Orleans cocktail.”

How to Properly Strain a Cocktail

Become familiar with the three main types of cocktail strainers and transform into a mixology master.

How to Properly Strain a Cocktail

This refreshing Kentucky Derby favorite is sure to be a crowd pleaser.

“It’s an English cocktail by birthright, but it’s always been served in New Orleans.”

How to Rim a Glass with Salt and Sugar

Adding salt or sugar to the outside of a cocktail glass can accentuate the flavors of the drink inside the glass, and elevate the overall drinking experience.

How to Rim a Glass with Salt and Sugar

Pisco Sour with Sherry and Grenadine

This version of the Pisco Sour adds wine for a light, tasty twist on the original.

Pisco Sour with Sherry and Grenadine

An Overview of Measuring for Cocktails

Making the perfect cocktail is easy once you know how to measure ingredients with precision.

An Overview of Measuring for Cocktails

How to Build an Egg Foam

How to Build an Egg Foam

Making Twists and Peels for Cocktails

Citrus twists and peels elevate the drinking experience by imparting acidity and aroma into cocktails.

Making Twists and Peels for Cocktails

How to Properly Shake a Cocktail

Shaking is a valuable mixology technique that helps to create cold, flavorful, and perfectly aerated drinks.

How to Properly Shake a Cocktail