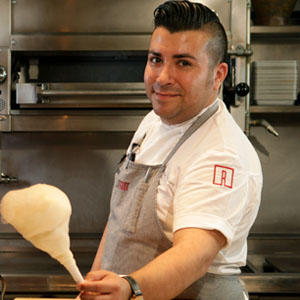 Phillip Lopez is Executive Chef and Co-Owner of Root, Square Root, and Root² in New Orleans, Louisiana. Though native to New Orleans, Lopez, an army brat, spent most of his childhood living in Germany, France, Spain, Austria, Holland, and Puerto Rico, experiences through which he developed his eclectic palate and creative mind. Upon returning to New Orleans, Lopez landed a job working under the famed Chef John Besh. Displaced after Katrina hit, Lopez headed to Washington, DC for the opportunity to further hone his craft under revered Chef Michael Richard at Citronelle. Once New Orleans had recovered, Lopez returned to rejoin Besh to work throughout his restaurant group, including at his highly acclaimed and celebrated Restaurant August. In 2010, after impressing Besh and the team with one of his own tasting menus, he was awarded the title of Executive Chef at the group’s Restaurant Rambla.

In 2011, with experience under his belt, Lopez embarked upon a solo adventure, opening his first restaurant, Root, in the Lower Garden District of New Orleans. Root opened to much acclaim, including being named as one of Bon Appétit’s 50 Best New Restaurants, and “Best New Restaurant” by New Orleans Magazine. Root received Eater’s “So Hot Right Now” award for New Orleans, and in its first year, received a rare, but coveted 4-bean review by The Times Picayune. Root has since been featured in Southern Living, Forbes, and Fodor’s Travel Intelligence. The success of Lopez’ soulful, yet creative, playful, and technical food, led him to open two additional restaurants, Square Root and Root². In 2011, Lopez was named a “Chef to Watch” by Louisiana Cookin’ Magazine. In 2012, he earned the title “Chef of the Year” by Eater New Orleans, and became a Star Chef “Rising Star Chef.”

Drawing deep flavor from the bones and residual seasoning of fried chicken, this stock is sure to liven up any dish in which it's used.

This dry battered, fried chicken has a satisfying crunch and the perfect amount of spicy creole flavor.

Fried chicken oil is used as the flavor base for this quirky and creative take on a classic confection.

Capture the essential flavor of fried chicken with this versitile, easy-to-make mousse.

This version of chicken soup uses fried chicken as the base, for a spicy southern twist on a classic.

This dish has all the flavor components of a southern picnic, playfully composed into one explosive bite.