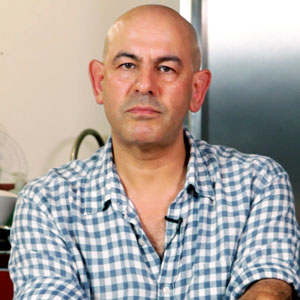 At the age of 40, Simon began having a midlife crisis. He quit his publishing job and set off on a journey across 31 countries. His goal? “Go everywhere. Eat everything.” He catalogued his experiences in what would become his critically acclaimed, bestselling memoir “Eat My Globe: One Year in Search of the Most Delicious Food in the World.” With its release, his food critic career began to truly take off. In 2008, The London Evening Standard voted Simon as one of the 1000 Most Influential People in London. In 2009, Simon’s website, Dos Hermanos, was chosen as one of the “100 Best Things In The World” by GQ Magazine, who referred to it as “Michelin starred food blogging.” In 2010, Food Network chose Simon to be a judge on Iron Chef America. In addition to Iron Chef America, Simon is now a regular judge on Food Network’s Cutthroat Kitchen and The Next Iron Chef. He frequently co-hosts Beat Bobby Flay and has made appearances on Extreme Chef and Best Thing I Ever Ate. His second book, “Eating for Britain: A Journey Into the Heart (and Belly) of the Nation” was an instant bestseller, and in 2011, he was voted Number 20 on the UK Press Gazette’s list of Top 50 Food and Drink Journalists.

Born to a Welsh mother who moved to India for Simon’s Bengali father before settling in the UK, Simon grew up eating a lot of Indian food; on Salted, Simon teaches an Indian Cuisine Bootcamp that pays homage to some of these classic dishes and techniques.

Mark your calendars for April of next year, when Simon’s newest book “Fed, White, and Blue” will be released. The book follows Simon's travels across the US in search of what it really means to be a hungry American.

"A favorite dish in any Indian restaurant, saag paneer is the Indian version of creamed spinach with lots of spices."

This marinade captures the rich and juicy flavors achieved from cooking in an authentic tandoor oven.

“Is there anything that says India more than Tandoori Chicken?”

This homemade version is just as flaky, puffy, and pillowy as the naan prepared in the Tandoor oven at your favorite Indian restaurant.

How to Temper Oil

Tempering is a method used in Indian cuisine in which spices are added to hot oil for flavor.

How to Temper Oil

Paneer is a fresh curd cheese that is light, flavorful, and easy to make.

"One of the most favorite things that I serve whenever I'm doing an Indian meal is this chutney."

This creamy and comforting Indian-inspired dish is packed with exotic flavors.

This classic Indian sauce is rich and flavorful, and can be used on top of shrimp, fish, chicken, and vegetables.

How to Break Down Fresh Ginger

The unique flavor of ginger adds warmth and spice to a variety of dishes.

How to Break Down Fresh Ginger