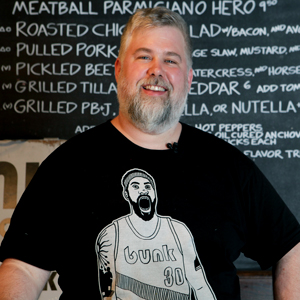 Chef Tommy Habetz has had an illustrious culinary career. He opened Bunk sandwiches in 2008 with business partner Nick Wood and quickly earned the moniker "Sandwich King of Portland." At Bunk, Chef Tommy uses his love of sandwiches to craft unique and creative fare. Bunk was awarded Standout of the Year by The Oregonian. Bunk's Pork Belly Cubano has been featured on Food Newtork's The Best Thing I Ever Ate and Diner's Drive-ins and Dives and was included in Travel + Leisure's list of America's Best Sandwiches. Bunk was included on Bon Appetit's list of "10 Sandwiches You Must Eat Now." Since 2008, Bunk has opened several locations including Bunk Bar, which has a full liquor menu and is known for creative cocktails.

Chef Tommy began his career at Bobby Flay’s famous, Mesa Grill and training under Mario Batali at Po, Chef Tommy was offered the prestigious position of sous-chef at New York City's Roman trattoria, Lupa. Chef Tommy went on to work in many esteemed Portland restaurants and served as head chef at Ripe Family Supper and Gotham Building Tavern. His former boss, Mario Batali has said that Chef Tommy “grants the wishes of those who love simple gustatory pleasures like a sandwich.” Chef Tommy’s next endeavor is Moon Pizza, set to open in Southeast Portland.

These sweet pork patties are packed with protein and flavor and make the perfect addition to any breakfast.

This sandwich uses uncommon flavors for a twist on a breakfast favorite.

An Overview of Cheese for Sandwiches

With so many different cheeses available, a little knowledge about the basics can go a long way.

An Overview of Cheese for Sandwiches

Potato Salad with Bacon and Eggs

This potato salad incorporates bacon and eggs for a delicious savory twist on a summer picnic classic.

Potato Salad with Bacon and Eggs

Make anchovies even more delicious by marinating them in high quality olive oil and fresh herbs.

Picking The Perfect Bread for Sandwiches

To make the best sandwich, consider the flavor and texture of the bread as you would with any ingredient that goes inside.

Picking The Perfect Bread for Sandwiches