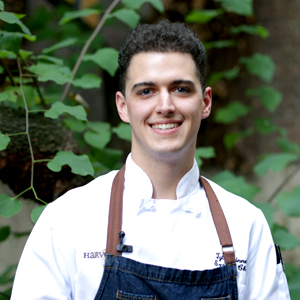 Tyler Kinnett is the executive chef of Harvest in Boston, where he showcases regional ingredients and produce-centric cuisine though fresh and sophisticated dishes. He has been featured in Boston Magazine and Zagat.

Tyler began his culinary career as a teenager, working at the restaurant of a gold club in his home state of Ohio. After graduating from the New England Culinary Institute in 2009, Tyler began working under Gordon Hamersley in Boston. He worked at other esteemed restaurants around the country including Thomas Keller’s Michelin-starred Per Se in New York. In 2012, he joined the Harvest team as a sous chef, helping to shape their new 6-course tasting-menu to accompany restaurant renovations. He eventually worked his way up the ranks to executive chef. Since landing the position, Harvest has been lauded by Travel & Leisure Magazine, Zagat, Boston Magazine, the Improper Bostonian, and many other publications.

This classic dish offers a taste of summer with farm-fresh vegetables, bold aromatics, savory tomatoes, and a bright basil pesto.

This fresh and clean watermelon, fennel, and cucumber salad is dressed with a bright basil dressing and is elevated by a sophisticated presentation.

This bright and creamy vinaigrette has a full body and bold character, making it the perfect complement to any number of salads.