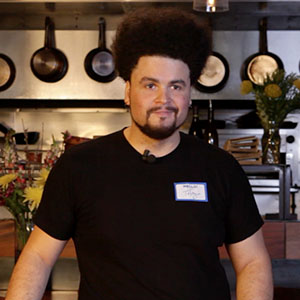 Chef Tynan Gibson is the evening chef at Portland’s Tasty n Sons, a neighborhood restaurant specializing in an inventive selection of family-style, American cuisine. He joined the Tasty n Sons kitchen as sous chef in 2011 and created a new and exciting dinner menu, drawing inspiration from American neighborhood favorites from East coast to West. Tasty n Sons was named Restaurant of the Year in 2010 by Willamette Week. While the restaurant is known as a go-to Portland brunch spot, Chef Tynan's innovative, "Americana meets Chesapeake Bay" dinner menu has helped turn Tasty n Sons into a renowned dinner destination.

Chef Tynan learned on the job, working in restaurant kitchens in Oregon and Colorado including American restaurant, Blackfish Cáfe on the Oregon Coast and polished bistro, Marché in Eugene, Oregon. When not working, Chef Tynan loves spending time with his wife and young son.

These french fries are fried twice, making them crispy on the outside but soft and creamy on the inside.

The Perfect Macaroni And Cheese

This rich and creamy mac and cheese will transport you back to childhood.

The Perfect Macaroni And Cheese

This meatloaf incorporates a punch of Cajun flavor for a twist on the classic meatloaf.