An Introduction to Wild Game 11:23

It’s game season! Learn how to break down and prepare delicate squab and wild Scottish grouse.

An Introduction to Wild Game 11:23

It’s game season! Learn how to break down and prepare delicate squab and wild Scottish grouse.

Squab is an “unfledged” pigeon; in other words, a young pigeon that cannot yet fly. While it is sometimes hunted, squab is generally farmed and raised domestically. The squab meat is less gamey than grouse and other wild game birds as it has a cultivated diet.

Grouse has a wild, gamey odor and a very strong flavor. Chef Paul cautions that it may be too much for traditional American diners, but he loves it and says that adventurous eaters relish the sensory connection with the animal they are eating. The grouse has a darker flesh because it has a scavenged diet, and it has thinner breasts because it is a bird of flight. For hunted birds like the grouse (as opposed to farm-raised, like the squab), you need to make sure none of the shot remains in the bird.

Chef Paul “frenches out” the breast of the squab. This means that he leaves the wing joint attached to the breast but pulls off the meat and skin, leaving a bone “handle” attached. Some chefs leave the joint intact, but Chef Paul removes it. He states that by leaving the exposed bone attached in this fashion is a reminder that the diner is enjoying a game bird.

Most parts of the game bird can and should be used, though Chef Paul eschews using the head, feet, or stomach and intestines. The liver can be coated in flour and fried, then topped with Mornay sauce for a tasty snack or appetizer. The heart can be used in a stew or cooked with the bones/carcass of the bird in a stock. This stock is a wonderful complement to the cooked game bird breasts as it enriches the earthy flavor of the dish.

It is important to cook game birds delicately. Cooking slowly at a low temperature is best – less opportunity to overcook and lose the juices, which leads to tough meat. Cooking quickly at high heat will result in undesirable “bird jerky” 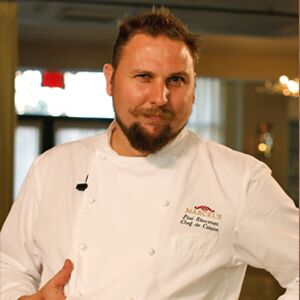 Chef Paul Stearman is a contradiction. The Washington D.C chef has an impressive, classic pedigree including training at L’Ac... read more

How to Debone a Duck Leg or Chicken Leg

Learn this classic skill to diversify cooking applications for chicken and duck legs.

How to Debone a Duck Leg or Chicken Leg

How to Butterfly a Piece of Chicken

Spread your culinary wings and learn this simple way to butterfly a piece of chicken for such dishes as chicken Milanese and chicken parmesan.

How to Butterfly a Piece of Chicken

How to Truss a Chicken

How to Truss a Chicken

Learn to long-marinate and slow-cook this unique cut of meat to make a decadent main dish using classic French techniques.

An Overview of Mirepoix

Mastering mirepoix and its variations will give you the foundation for myriad sauces, stocks, and soups.

An Overview of Mirepoix