This dish is rich, hearty, and bursting with New Orleans personality.

This dish is rich, hearty, and bursting with New Orleans personality.

In French, étouffée means ‘to smother.’ Chef Wilfredo uses crawfish in his étouffée, but the dish can also be prepared with shrimp, chicken, or rabbit.

A roux is made with equal parts fat (e.g. butter) and flour. It is used to thicken soups, stews, and sauces. To learn how to make a roux, visit Chef Bryon Freeze's "How to Make a Roux" tutorial located at the bottom of the page.

When the flour and butter first come together it is called a blonde roux. A blonde roux is typically used in applications when you do not want to add much additional color such as clear stocks, or a béchamel sauce. As the roux continues to cook, it develops a brown color and a rich, nutty flavor.

A trinity in New Orleans is the basis of many dishes; it is made up of equal amounts of onion, celery, and bell pepper. Trinities may vary from region to region. The French version is called a mirepoix, which uses carrots instead of peppers. The Spanish version is called soffritos, and is used as the base for paella.

Louisiana crawfish tails come pre-cooked and as a result, need to be heated rather than cooked. If using fresh, raw shrimp, add towards the end of the cooking process, about 10 minutes prior to serving in order to allow enough time for them to cook through.

Chef Wilfredo refers to "Emeril's Essence," which is the creole seasoning used in many of his recipes. For this recipe, visit Chef Wilfredo's"An Overview of Creole Seasoning" tutorial located at the bottom of the page. 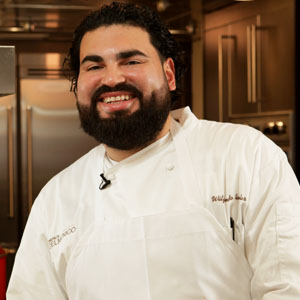 Will Avelar, a New Orleans Native and Sous Chef at Emeril’s Delmonico, spent his childhood in Costa Rica, where he was ... read more

How to Make a Roux

A roux is one of the basic fundamental techniques and ingredients in making sauces and soups.

How to Make a Roux

An Overview of Creole Seasoning

This Creole seasoning is essential for southern cooking and can be used to blacken fish, season vegetables, and to top french fries.

An Overview of Creole Seasoning

“This jambalaya is what Creole cooking is all about. And for occasions where a lot of people are invited over, it is the perfect dish to serve.”

A Creole classic, this gumbo combines ham and fresh herbs to create a warm and flavorful one-pot dish.