A Basic Overview of Cooking With Leaves 06:43

A Basic Overview of Cooking With Leaves 06:43

Wrapping food in leaves before cooking is an ancient technique that helps the food retain moisture, adds flavor, and prevents it from burning or falling apart, especially while cooking over a live fire. For two delicious recipes that employ this technique, visit Chef Josh’s “Grilled Scallops Wrapped In Hoja Santa With Chili Mayo” tutorial, and “Corn Husk Grilled Fluke With Ponzu Sauce” tutorial, both located at the bottom of the page.

Hoja santa is a large-leafed aromatic herb that grows naturally in tropic Mesoamerica. Its name translates to "sacred leaf" in Spanish. It is also sometimes referred to as “root beer plant” because of its similarity in flavor to that of sassafras bark, a main flavoring ingredient in root beer. Hoja santa leaves can be found in many Mexican grocery stores and farmers markets. If hoja santa is not available, another kind of grilling leaf can be used instead.

Shiso is a Japanese herb in the mint family, commonly used in fish, pork, noodle, and rice dishes. To learn more about this ingredient, visit Chef Gregory Gourdet’s “A Basic Overview of Shiso” tutorial located at the bottom of the page.

Corn husks are popularly used in Southwestern cuisine to keep food or fillings in place, retain moisture during the cooking process, and impart a sublte corn flavor and fragrance. Corn husks are not edible and must be removed before consumption. Corn husks can be purchased in most grocery stores. For a recipe that uses corn husks, visit Chef Geraldine Gillilan’s “How to Make A Classic Green Corn Tamale” tutorial located at the bottom of the page.

Kombu is an edible variety of kelp that is commonly used in Japanese, Korean, and Chinese cuisines. It is sold in large, dry sheets. Kombu is high in iodine as well as glutamate, which gives it its umami properties. Kombu is also key ingredient in the Japanese essential stock, dashi. To make dashi, kombu is boiled with fermented bonito flakes. Dashi is used to make miso soup. Kombu can be purchased at most grocery stores and at specialty stores. 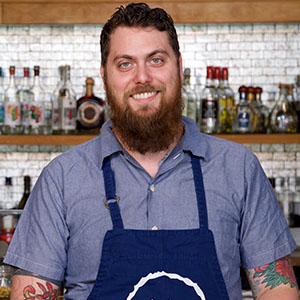 Grilling these scallops in leaves protects them from high heat, and keeps them moist and flavorful.

This tender white fish, cradled by a corn husk, is simultaneously steamed and smoked to create a perfect balance of texture and flavor.

"This is the most popular tamale that we serve at Lula. It's simple green corn and can be made at any time of the year."