Cast iron is great for creating crusty and caramelized sears on steaks, fish, chicken, and other proteins.

The term “seasoning” in reference to cast iron refers to the polymerization of oil on the pan, or the binding of oil through high heat to the cast iron to create a non-stick coating.

Washing household cast iron is not particularly necessary unless a notable mess has been made in it. Wiping down pans with a clean dish towel after use is a perfectly sufficient method of cleaning. Chef Tim, who uses his cast iron pans in the busy environment of his commercial kitchen, washes his cast iron pans with soap if necessary, and even runs them through the dishwasher. The most important thing to note about this process is that the cast iron must be re-seasoned after a heavy wash.

In addition to seasoning on the stove, cast iron can also be seasoned in the oven. For this method, heat the oven to as high as it will go, or around 500 degrees Fahrenheit, and allow the cast iron to get up to temperature in the oven. Once extremely hot, employ the same process of oiling the pan, wiping it down, and repeating until an oil coating forms on the pan.

The best way to season a cast iron pan is to continually use it. Oiling, cooking food, and wiping down the pan after use will achieve natural “seasoning.” 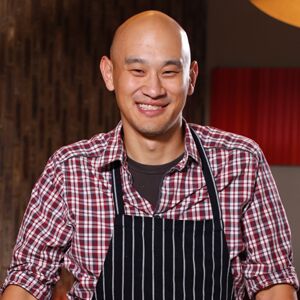 Searing uses high heat and hot fat to cook protein so it is crispy on the outside, juicy on the inside, and flavorful all-around.

"I'm going to show you how to cook a really tender, juicy piece of duck."